Laparoscopic Surgery Means Smaller Incisions, Quicker Recoveries
Laparoscopic surgery is also referred to as minimally invasive surgery. This is a surgical procedure performed with the assistance of a video camera and several thin instruments. During the surgical procedure, small incisions of up to half an inch are made and plastic tubes called ports are placed through these incisions. The camera and the instruments are then introduced through the ports which allow access to the inside of the patient.

The camera transmits an image of the organs inside the abdomen onto a television monitor. The video camera becomes a surgeon’s eyes in laparoscopic surgery, since the surgeon uses the image from the video camera positioned inside the patient’s body to perform the procedure.

Laparoscopic surgery first became popular twenty years ago. Performing surgery through tiny incisions is safer and better for you – the patient – than making large incisions. Usually you may go home the same day as your surgery, and can return to work in a week.

Benefits of minimally invasive or laparoscopic procedures are: 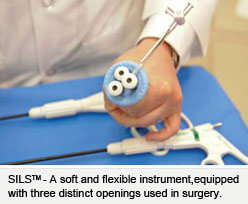 SILS™, or Single Incision Laparoscopic Surgery, represents the evolution in laparoscopic hysterectomies, using only a single small incision in the belly button, through which the entire hysterectomy is performed using Covidien. As a result, women experience less pain and trauma, and usually a significantly shorter recovery period than conventional laparoscopic surgery. Best of all, because the incision is “hidden“ in the belly button, there is little to no visible scarring.

Patients report an overwhelmingly positive experience with the SILS™ hysterectomy. The incision is hidden in the belly button and there is less pain with only one incision to heal, and decreased risk of vascular, bowel and nerve injuries. It’s important to stress that the SILS™ technique is not just for hysterectomies – but for any laparoscopic surgery.

Developed as a technique to provide a single access point for multiple surgical instruments, SILS™ has revolutionized the field of endoscopic surgery with the potential to treat a number of conditions including obesity, gastroesophageal reflux disease and appendicitis, and removal of problematic organs including the gall bladder, kidney and spleen. SILS™ also may be used for hernia repair, colon resection and liver resection.

SILSA pioneer in the SILS™ technique, Dr. Lense made surgical history in March, 2009, as one the first surgeons to perform a SILS hysterectomy. In each of the more than 150 patients he has since treated using the SILS™ technique, he has seen a tremendous difference in recovery times, compared to traditional laparoscopic hysterectomies.

For more information on the SILS hysterectomy, click here.