Can Too Much Protein in Your Diet be Deadly? 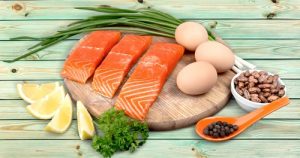 We all need it but can too much protein in your diet be deadly? Almost all of us grew up hearing that you can have too much of a good thing. As children, we probably learned that the hard way by drinking too much soda, or by stuffing ourselves with extra Halloween candy. The result was never pleasant. Though overdoing sensible portions may not always be dangerous, it can certainly have disagreeable repercussions. This applies to most over indulgences, including food the body may need such as fats, carbohydrates — even proteins.

What are Proteins and Why Do We Need Them?

To imagine what a protein looks like, picture an open charm bracelet lying on a table from a distance. Each charm is visible but indistinguishable from the one next to it. As you get closer, those charms begin to have distinct shapes and sizes, each with their own meaning.

Under a microscope, proteins resemble that bracelet. They are long strands linking together their own ‘charms’ called amino acids, and each one has its own unique formation and ‘memory’ to perform its purpose.

There are twenty different amino acids essential to the human body, and each protein can have all or only some of the ones you need to remain healthy. All twenty of those amino acids linked to proteins are vital to overall health and body function. Some proteins have the complete twenty, while others have only a few. This explains the different sizes of strands attached to each protein. Any or all amino acids can also appear on the same strand hundreds to thousands of times in varying sequences.

These amino acids literally keep you alive, creating enzymes, hormones, and multiple body chemicals. They build and repair tissue, blood, muscles, cartilage, and bones. Protein provides energy and even reproduces more protein such as your hair, skin, and nails.

Where Do We Get Protein?

Mother Nature, in her wisdom, has provided this planet with everything we need to sustain human life, and that includes numerous sources of protein. Though the body produces many of the twenty vital amino acids, you still need roughly half from various foods. There are only a few complete food sources, and these are:

Other foods rich in protein include beans, pulses, nuts, seeds, and legumes. The following are only a fraction of foods that fall into these categories:

Yet another excellent source is protein powder.

How Much Protein Do I Need?

The recommended daily protein guideline is 1.6 grams per kilogram of weight. This means that a woman weighing 50 kg or 110 lbs. would require 80 grams or 2.8 ounces. This amount is not carved in stone. Many factors, such as lifestyle, activity level and individual health come into play. You may need more if you are very athletic, or possibly less if you lead a more sedentary life.

What Happens if I Don’t Get Enough Protein?

Not enough protein intake can cause the body to work less efficiently, especially if the composition of those proteins does not meet your basic physical needs with the necessary amount of amino acids. Though they may be high in protein, nibbling on handfuls of walnuts all day, may make you deficient in the other amino acids it lacks. By doing this, you may find yourself experiencing such negative effects as:

Can Too Much Protein be Deadly?

Though ingesting too much protein may have undesirable effects, there are no reported cases of excessive amounts of protein resulting in death. In rare instances, when massive protein consumption was reported to be fatal, it was later learned that there was an underlying disorder or disease that contributed to the event.

The body is unable to store protein for later use. Any surplus you don’t need is first turned into energy and then to fat. That, in turn, is stored away, causing weight gain. Overloading on protein rather than eating a balanced diet can also run the risk of you not getting other nutrients you need in the form of fiber, carbohydrates, vitamins, and minerals vital to good health.

Too much protein won’t kill you. You may, however, have some unpleasant reactions such as:

Copious amounts of protein are only usually dangerous if you have a genetic, hereditary, or pre-existing problem. Excessive protein intake may accelerate further problems if you already suffer from weakened or compromised kidneys, liver, pancreas, or heart. Tainted or diseased food containing protein can be lethal in small or large amounts depending on the severity of the toxin. In short, too much protein can contribute to complications, but simply eating too much of it does not have deadly consequences.