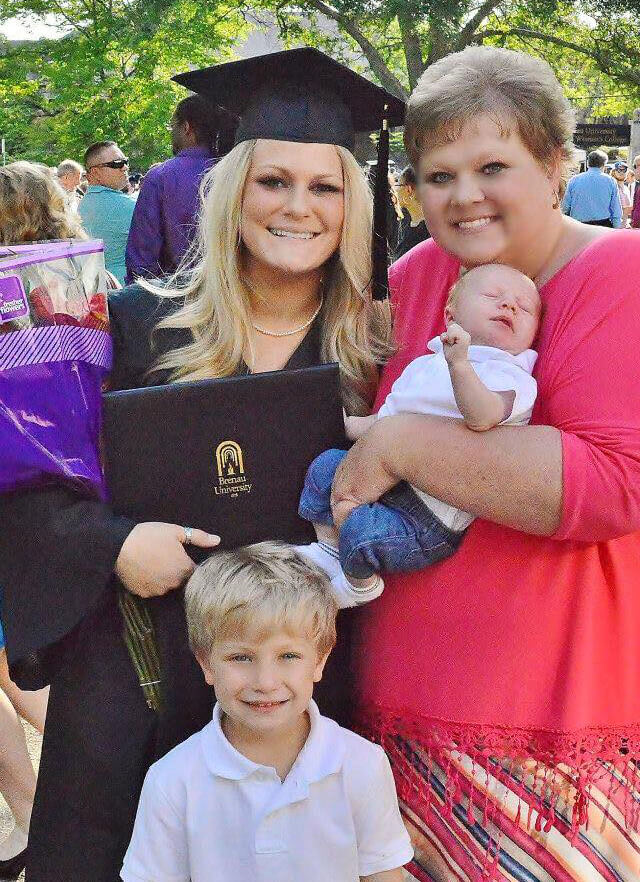 Hannah with her sons and Aunt Cindy

Hannah is a young mother we’re spotlighting this month to help educate teens about the challenges of teen pregnancy. We had a little Q&A session with Hannah in which she shared her experiences as a teen mom.

Can you tell us what it was like becoming pregnant as a teen?
I was in high school when I became pregnant so that in itself was difficult. I basically skipped my childhood so that was hard, especially when my friends were enjoying a regular teenage life. But everything had changed and nothing was more important than my baby so I knew I had to take it seriously and behave responsibly.

How did you handle school?
I stayed in school for the first four months of my pregnancy. After that, I took online classes. When I returned to high school about a year later, I was dual enrolled and took classes at Gainesville State as well, where I graduated with honors.

From there, I went to college at North Georgia and then transferred to Brenau University, where I entered their nursing program. I also graduated with honors from there and now have my bachelor’s degree in nursing.

What motivated you?
My son was my biggest motivation. I wanted to give him a better life. I also wanted to prove to myself that I wasn’t going to be a statistic. Getting pregnant in high school meant facing a lot of judgment and criticism. I was told I wouldn’t amount to anything and that I wouldn’t even graduate high school. For me, regardless of my circumstances, my dreams were more important and I didn’t want to give up on them.

How did you handle child care?
I had an excellent support system. My parents were especially wonderful. They helped watch my son while I was in school or had to study. Without them, I don’t know where I would be. My grandparents and family friends also helped care for my son. Having a strong support system definitely played a huge role in my success.

How has your life changed since then?
There have been so many changes. I got married last May and gave birth to my second child in March of this year.

In regards to my career, I’ll be working as a nurse at the Ronnie Green Heart Center of Northeast Georgia. I worked there as a nurse extern in the cardiac Intensive Care Unit during my last year in college and upon completion, they offered me a position.

What would you like pregnant teens to know?
I want them to know that their life is not over. That there’s still hope for a bright future. And even though they’ll probably be told they can’t make it, it’s simply not true. Even when the judgment seems unbearable at times, they just have to push through. It’s not easy but they can do it. After all, if I can become a success story, anyone can.