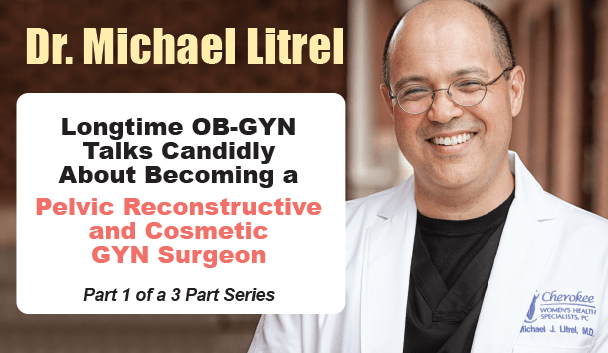 An Interview With Michael Litrel, MD, FACOG, FPMRS – Part 1 of a 3 Part Series

Links to Part 2 and Part 3 of Dr. Litrel’s interview below.

One of your areas of specialty is Cosmetic Gynecology, especially vaginal rejuvenation. Can you expand a little on the subject of vaginal rejuvenation?
Originally, as female reconstructive surgeons, we would operate on the vagina or internal and external genitalia. We took care of medical issues such as bulges or weakness that prevented the organs from working properly.

Vaginal rejuvenation is a more recent elective surgery to enhance the visual appearance of a woman’s genitalia. Over the past twenty years, the field of Cosmetic Gynecology – especially vaginal rejuvenation – has become the fastest growing niche in plastic surgery. As the popularity increased, we began to see patients who’d been encouraged to undergo plastic surgery – from surgeons who don’t specialize in women’s pelvic anatomy. We’d find ourselves called in to correct whatever mistakes had been made in those procedures – but the problems were not always ‘fixable.’ It became obvious that the best thing we could do was to offer Cosmetic Gynecology ourselves, and at least insure that the women who came under our care could avoid the irreversible damage from inexpert surgery, and receive the benefits of surgery from Pelvic Reconstruction Specialists.

Apart from esthetic merits for visual genital distortions, or internal adjustments that restore tautness and sexual pleasure, what other conditions can be corrected, with these procedures?
When it comes to external cosmesis, which is surgery performed outside the body, we mostly treat conditions like elongated genitals or labia which may interfere with clitoral stimulation. It’s mostly anatomical—things are too long, getting in the way, disrupting sexual pleasure or causing orgasmic inability.

Vaginal surgery consists mostly of correcting “bulges,” be they bladder, rectal or intestinal bulging. We increase the caliber of the vagina to allow for better sexual sensation. Since the vagina leads to the internal sexual reproductive organs, if there’s pain or bleeding or scar tissue, lots of times those things have to be corrected surgically as well.

Sexual interest and gratification often diminish over time, due to a number of reasons such as lack of lubrication, the loosening of vaginal tissue and muscle, etc. Can pelvic reconstruction or vaginal rejuvenation give women a renewed sense of sexuality and confidence—and if so – how?
I think it’s a very individual thing. I’ve taken care of thousands of women and sexuality issues can vary. They can come from anatomical differences between partners, hormonal issues– even lack of awareness of proper technique. The list is endless, so I’m not going to say “have surgery and it will fix everything.” I’ve seen the full range of what causes problems, and I deal with them all on an individual basis.

As an example, I saw a patient recently who came from a neighboring state. After asking questions about the pain she was experiencing, I examined her and found there was nothing physically wrong with her. After speaking with her, I was able to pinpoint that the real problem stemmed from sexual abuse. I’m able to treat the anatomical problems, but a lot of these complaints simply must be addressed through counselling. I certainly wouldn’t recommend surgery in her case, but would guide her to other venues of help. It’s a complicated subject and doesn’t really have one answer.

Are the benefits of pelvic reconstruction and vaginal rejuvenation permanent, or does time eventually cause the original problems to recur?
I’ve seen patients I’ve operated on 10 years ago, and they’re doing great. For a lot of anatomical problems, if we fix them and they don’t suffer damage, they stay fixed. For instance, if a woman has a normal sex life and doesn’t have a baby, she probably won’t need surgery, and then, if it’s a cosmetic thing, such as labial elongation (hypertrophy), then once you fix that, it’s not going to grow back. It’s not common to have to re-operate.

For the cosmetic parts, however, sometimes you have to perform a few nips and tucks six months or a year later. But typically, that’s not necessary either. As for the tightening operations, once you do it, you’re done.

Many people might describe the procedures we’ve covered as “frivolous,” “unnecessary,” “a waste of money,” etc. Their assumption might be that you need to accept yourself “the way you are.” Can you describe the positive physical and psychological impact these procedures have had on some of your patients during your extensive career?
Fifteen or twenty years ago, I probably would have said the same thing. I remember I was very much against breast implants at one time, but over years of practicing, I noticed that women with these implants not only looked better, but felt wonderful about themselves. We all want to feel good about ourselves.

Now, in the field of Cosmetic Gynecology, with procedures such as vaginoplasty or, labiaplasty, the reason we, as female reconstructive surgeons are in this field, is because we know we’re the best at fixing it and we know that it’s not just about cosmetic surgery. It’s functional as well. Unlike a breast implant, face lift, or even a tummy tuck, none of which really have a function, internal and external genitalia are functional. Whether it’s sex, urination or defecation, there’s a biological function that’s dependent on the correct anatomical restoration of a woman’s body. So in terms of ‘frivolous,’ well, if you’re fixing a bulge here or there because a woman’s bladder is dropping or leaking, or you’re fixing the rectum bulging out, you can also do a tightening operation because the patient desires it for their sex life. I don’t think a good sex life is frivolous. I think it’s an important part of a relationship and it’s an important part of the way a woman feels about herself. 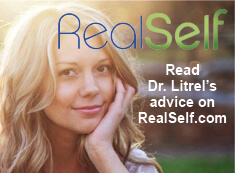 The word ‘surgery’ can be frightening and intimidating. It usually sparks the fear of pain, long convalescence, operative and postoperative complications, etc. On average, what is the recovery period for most of your procedures?
Typically – because we do less invasive surgery with laparoscopes and robots – one to three weeks. Certainly some healing processes can go on for three months, but after one to two weeks, people generally feel pretty good.

At one time, the standard treatment for conditions related to pelvic prolapse was a hysterectomy. It’s now possible to treat Pelvic Floor Disorders with pelvic reconstructive surgery. How has the specialty of pelvic surgery changed since you began? What conditions are fixable that women forty years ago would just suffer with?
Nowadays, the biggest changes have been the minimally invasive laparoscopic surgeries. We can visualize things better. We can access things and also repair things less invasively. Additionally, surgery is less risky than it used to be—better antibiotics, smaller holes. Tumors and organs can be removed with much tinier incisions. We do a lot more uterine saving surgery as opposed to hysterectomies nowadays.

What diseases, conditions or illnesses prevent a person from being a suitable candidate for pelvic reconstruction or gynecology cosmetics?
We have office procedures so that we can make things look better and work better without doing any surgery. If someone is sick with underlying medical problems, I don’t think they’ll be presenting with issues of vaginal laxity or problems of cosmetic appearance. They have bigger issues such as being unable to breathe, walk, etc. Typically I don’t see patients whose medical problems prevent them from having surgery. We can do more minimally invasive things for patients today.

I had a patient recently from North Carolina who was convinced I would have to perform countless surgeries. As it happened, all I had to do was a ThermiVa, a procedure which is a low frequency energy treatment we deliver in the office. It requires (3) thirty minutes treatments over a period of three months. I also have an 82 year old patient suffering from diabetes, and I’m still able to do something to help her.

Other than natural processes in the body such as aging, giving birth, etc., can your procedures repair such things as birth defects, accidental injuries, or physical trauma—and can these things be corrected even years after the damage has occurred, or is time of the essence?
Birth defects occur during birth and we certainly have to perform reconstruction because of that. This is not done in childhood, but when the person is diagnosed as an adult. If you’re referring to something like an anatomical variance, for instance, something like size and shape, or a congenital problem such as not having a uterus, vaginal septums, having two uteruses, or a hymen that doesn’t allow blood flow, typically, we do not address these issues until a woman is older. In fact, we may not become aware of them much before 15 years of age.

Defects can also happen during such occurrences as miscarriages. Typically, injury is not common. Unlike breaking an arm or something like that, the uterus and a woman’s genitals are very well protected, because they’re in the midline of the body and the center of gravity. So if injury does occur, it’s usually quite easy to repair.

To prevent such problems as infections, flaccidity, sexual discomfort, or sexual disinterest, what can women do to maintain personal gynecological health, other than general cleanliness, yearly pap smears and Kegel exercises?
I think that probably the most important thing that women can do is limit their number of sexual partners and just be sexually active with people that are faithful to them, love them and want the best for them. I think multiple partners are the number one cause of the problems that women have. If you marry someone, and have a good sexual monogamous relationship with them, it would solve most of the problems we see.

I have a 22 year old patient who is beautiful. She’s had several sexual partners. I did cosmetic surgery on her and some tightening, but she hates herself because of things her partner said to her regarding her genital appearance. Had she waited for the right, committed partner, he most likely would not have said anything and accepted her the way she is.

Many physical issues also come with a related psychological issue such as fear, shame, religious inhibition, etc. As a women’s health specialist, how do you personally deal with the psychological deterrents to put your patients at ease?
I think we’re all a little inhibited. It’s just part of being a person. Inhibitions tend to disappear when you’re in the process of having a baby come out of your body. Nothing will stop you from pushing out that baby. My specialty is OB/GYN, and my subspecialty is reconstructive surgery, so I’ve delivered thousands of babies, and women are generally comfortable with that. Many of my patients have gone through a lot, and I’ve gotten very close to them, but I think that’s only due to good communication. People want someone to help them, and if you let them know it’s okay to feel a certain way, then it’s okay to feel and express the pain, etc. They just need to be nurtured in such a way that we can open up the lines of communication.