Eating Fish During Pregnancy: What’s Safe and What Isn’t

In slight continuation of our “Is it Safe to…” blog post from last week, one main question on lots of mamas-to-be minds is getting enough omega-3’s to help with baby’s development. Omega-3’s have been reported to help promote healthy fetal brain development, and reported benefits include fewer behavior problems, better verbal skills, and even higher IQ’s.

However, understandably, some pregnant mamas are concerned with the levels of mercury in certain fish, and knowing which fish to eat to gain this important nutrient and which to avoid can be tricky. Cherokee Women’s Health shares some important facts on which fish are safe to eat and which fish you should avoid until after your delivery.

The FDA and EPA say pregnant women can safely eat up to 12 ounces of seafood a week. So which fish is best for pregnant moms? Ideally, you want to shop for or order fish low in mercury but high in omega-3’s. Salmon makes for an excellent choice in both categories (whether wild-caught or farm-raised). Herring, trout and sardines are are low-mercury, high-omega-3 options. Other safe choices include shrimp, pollock, catfish and canned light tuna, but you should limit albacore tuna and tuna steak to no more than 6 ounces a week.

The fish found to have higher levels of mercury include shark, swordfish, escolar, marlin, and orange roughy. Pregnant women are advised to limit these to twice per month. 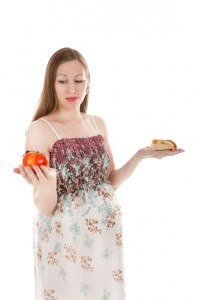 Of course, when eating any type of fish, you want to make sure it’s cooked to an internal temperature of 145 F. As a general rule, the fish is done with it separates into flakes and appears opaque throughout. For shrimp, lobster and scallops, cook until they’re milky white, and don’t eat any clams, mussels and oysters until their shells open. (And discard any unopen shells.) If you aren’t sure about the best way to prepare it, Pinterest has a ton of delicious-looking options that are sure to whet any pregnant mom’s appetite.

If fish has you thinking “yuck,” don’t worry – there are other ways to get omega-3 fatty acids. Flaxseed, walnuts, sunflower seeds, pine nuts and soybeans are all good sources of omega-3’s, and other foods have been fortified with this nutrient, including yogurt, milk, and eggs. Additionally, you can talk to your obstetrician or midwife about an omega-3 supplement at your next prenatal checkup.